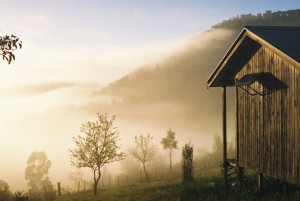 Jim awoke feeling well-done. Like he’d been turning on a rotisserie all night. The pain in his hip and thigh had kept him turning over, trying to find a comfortable position.

The rain on the tin roof was comforting, as always. He loved the sound as much as anyone.

But the dripping down the flu was disturbing. As always.

It was keeping time, alternately strumming and twanging. Irregular time.

There was something beautiful about it.

But Jim had installed the flu himself. The dripping sounded like failure.

The strumming and the twanging set off a song in his head. Lanie Lane was singing “You fell in lo-ove with a Cowboy. And that’s what you get”. One of his favourites.

It reminded him of snippets of his dream. Cowboys. Jim was trying to take over a farm, from some heavily armed cowboys. Or a heavily armed farm. There was a stables – with no sides. Well, half tall walls. With a trough on top. And lots of guns.

Dreaming of reasoning with cowboys to give up their guns. And their farm…

Or something like that. “And that’s what you get.”

Jenny won’t tell him its proper name. She laughs as he keeps trying to guess it. Won’t tell him again. It’s been said too many times in the last month.

But he can picture it on the anatomy diagram. It’s not the procrastinator muscle? No. Can see it cutting horizontally across the glutes – straight through the middle of the buttock.

But she won’t tell.

In the hut with the tin roof, there’s no internet. So he can’t ask Dr Google.

The irregularity is because of surface tension. How long does it take for the drip to get big enough to break free?

Not as long when it starts raining harder.

In the dream, there was a little fellow, being cautioned about falling off the roof. Beware of getting a brain injury, they said.

But he would argue til the cows come home that he doesn’t make things complicated – they just are.

Jim knows better than to argue with that.

But he’d really like to remember the name of that muscle. Because that’s where the pain is coming from, even if he feels it along the ITB – which is really the quadriceps, since the ITB can’t feel pain.

The piriformis! That’s it.

Then the rain stops.

But there’s yet another twang…