What are we doing here?  A series of discussions about the intersections between ancient and modern philosophy

In this six part discussion series we seek to foster a dialogue that brings together aspects of eastern and western philosophy. The objective is to develop a 21st Century philosophy that is informed by both the ancients and modern philosophy; one that is respectful of, yet freed from traditional constraints.

The discussions will be presented and facilitated by Dr Karl Smith, who started practicing yoga about the time that he commenced formal studies in western philosophy. For more than 20 years he has drawn on these two rather different traditions in his efforts to respond to the challenges of life in the modern world.

Like many modern yogis, Karl first turned to yoga in a quest for ancient insights that might help to explain, or correct, many of the things that are unsatisfactory about the world today. The authoritarian and disciplinarian tendencies of ancient traditions encountered along the way, however, lead to a deeper understanding of the riches and opportunities of the modern world.

These discussion will not seek any simple resolutions to life’s great questions. Instead, we will interrogate fundamental questions such as “Who am I?” “Who are we? and “How are we to live?” and explore some of the different ways that philosophers from different traditions — both ancient and modern – have attempted to answer them.

There is no required reading, no homework and no assessment. There is no prior knowledge required either. All that is required is for you to come prepared to engage openly, critically and generously in ideas that might conflict with your beliefs. You need to be prepared to think differently, and to share your thoughts.

The series consists of 6 x 90 minute seminars, held weekly in the Blue Room at St Mark’s Church Hall, 250 George St, Fitzroy, on Wednesday evenings, 6.30–8 pm. Everyone who signs up for the full series will also receive a one hour one-on-one interview with Karl.

In the Vedic and Buddhist traditions, the self is an illusion, a construct of the ego. Being attached to this construct is an obstacle to enlightenment.

In some modern philosophical traditions, the self is a narrative construct which is essential for finding our way in the world. Following this line of thought, a powerful form of personal therapy has developed focusing on how we construct this narrative, and how we can take greater control of that construction. This therapeutic approach assumes that many of our anxieties, self-doubts, and psychological traumas stem from a socially constructed narrative that is not a “true” reflection of who we really are. The modern tradition has developed a variety of tools for deconstructing the narrative self to clear the way for constructing a more empowering self-concept.

The ancient tradition has advocated accepting the no-self. This view maintains that we are in fact a part of a universal whole, but the belief in the reality of our petty ego-constructed self-blocks us from realizing this to its fullest. Surrendering your petty ego-self to something greater than you (the Universal Self) reveals the artifice of the ego-self and opens you to a higher truth.

In this seminar we will ask if these are quite different processes, or perhaps two different ways of doing the same thing?

The following details for weeks 4–6 are provisional

Elaborate on the intentions workshop write-up, focusing primarily on developing an understanding of the psychic flux, its social construction, and the interrelationship between meditation / mindfulness practices in untangling (or disentangling) the representation / intention / affect of the flux.

In this session we will go much deeper into the ideas that I have outlined in elephant journal:  Setting Intentions and the Svastha-yoga blog Intentions

Many of our struggles have to do with making sense of meanings, categories, and words. What do words mean? In many respects we have learned, we have been taught, to treat the meanings of words and fixed, unchanging, and important. SO we treat them like boxes with clearly defined boundaries – the word “woman” means this, that and the other thing, but not those, them or that stuff, for example. This places great stress on some people who were born female, but don’t conform to this or that “idea” of what a woman is.

Wrapping our heads around this idea can be incredibly empowering and liberating.

Rumi is often quoted in yogi circles: “When I was young I was clever. I wanted to change society. Now I’m older and wiser and focus on changing myself”. This and similar BS need to be addressed. It’s not an either:or option – and changing the self, although crucial, is not sufficient. For example, TM has not changed the world, contrary to its promises.

In this session we will go deeper into exploring some of the issues that arose in the Svastha workshops Intentions and Balancing Effort & Surrender, also discussed in elephant journal here and here. 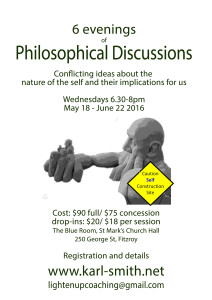